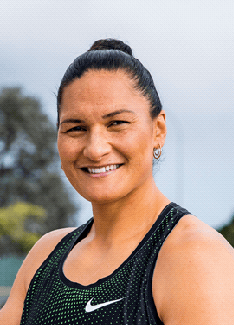 Dame Valerie Adams is one of New Zealand’s greatest ever athletes and one of the all-time best female shot putters globally, with a personal best throw of 21.24 metres.

She first broke into the international scene in 2001 by winning the world youth title and went on to win the world junior title the following year; this was followed by 56 consecutive competition wins.  In 2014 she was named the World Athletics (formerly IAAF) Female World Athlete of the Year. She competed in her fourth Olympic Games in 2016, having won gold in Beijing 2008 and London 2012. In 2018 she competed in the Commonwealth Games on the Gold Coast, six months after the birth of her first child.

​​​​​​​She is fluent in four languages and splits her time between her home in Auckland and training in Europe. In 2016 she was appointed as a Dame of the New Zealand Order of Merit. She is currently planning her fifth Olympic campaign for Tokyo 2020 which has been postponed to 2021.